The origins of this wonderful breed

Thefirst mother of the Selkirk Rex is Miss DePesto. She was born in 1987 in Montana, USA, and was the only kitten in the litter with a curly coat, her litter brothers and sisters and also their mother, all had a normal smooth coat. She ended up with Persian breeder Jeri Newman, who found her so special that she started breeding with her. Miss De Pesto was mated to a black Persian male and she had both smooth-haired and curly-haired kittens from him, which showed that this coat mutation is inherited dominantly. Jeri Newman decided to continue breeding with this new Rex mutation and as outcross partners, in addition to Persians, American Shorthair cats, Exotics and British Shorthair and British Longhair cats have been used. These combinations are still allowed until 2020. After that, the breed must continue on its own. The Selkirk Rex was recognized as a breed by the TICA in 1994 and by the CFA in 2000. 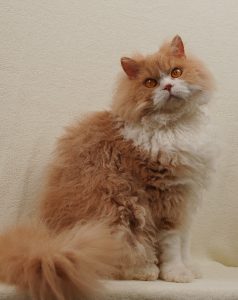 The character of the Selkirk Rex is quite calm, he loves to cuddle and play and is easy to get along with.
The temperament of the Selkirk Rex mirrors that of the breeds used in its development. They have much of the laid-back, reserved qualities of the British Shorthair, the adorable character of the Persian, and the playfulness of the Exotic Shorthair. They are very patient, tolerant, and loving.

The Selkirk Rex is a sturdy cat, with a short-haired or a long-haired curly coat. The coat is soft and woolly, with a loose curl. Heterozygous specimens have a fuller coat and are best suited for show, the homozygous cats have smaller curls and somewhat less coat volume. Unlike some other Rex breeds, the Selkirk Rex loses a lot of hair during the moult. The head is round, with large round eyes, the ears are of medium size. The breed is recognized in all colors.

The 6 different types of Selkirk Rex

These females and males have a fuller coat and long hair. Up until their 2nd year of life, they lose their curly coat regularly, partially. Castrates will also curl harder because of the hormonal fluctuations in open males and females.
From this combination with a heterozygous partner will come straights, heterozygous and homozygous kittens.
Should you do this combination with a straight, you will get heterozygous and straights. Should you use a homozygous partner, you will get curly kittens in heterozygote and homozygote 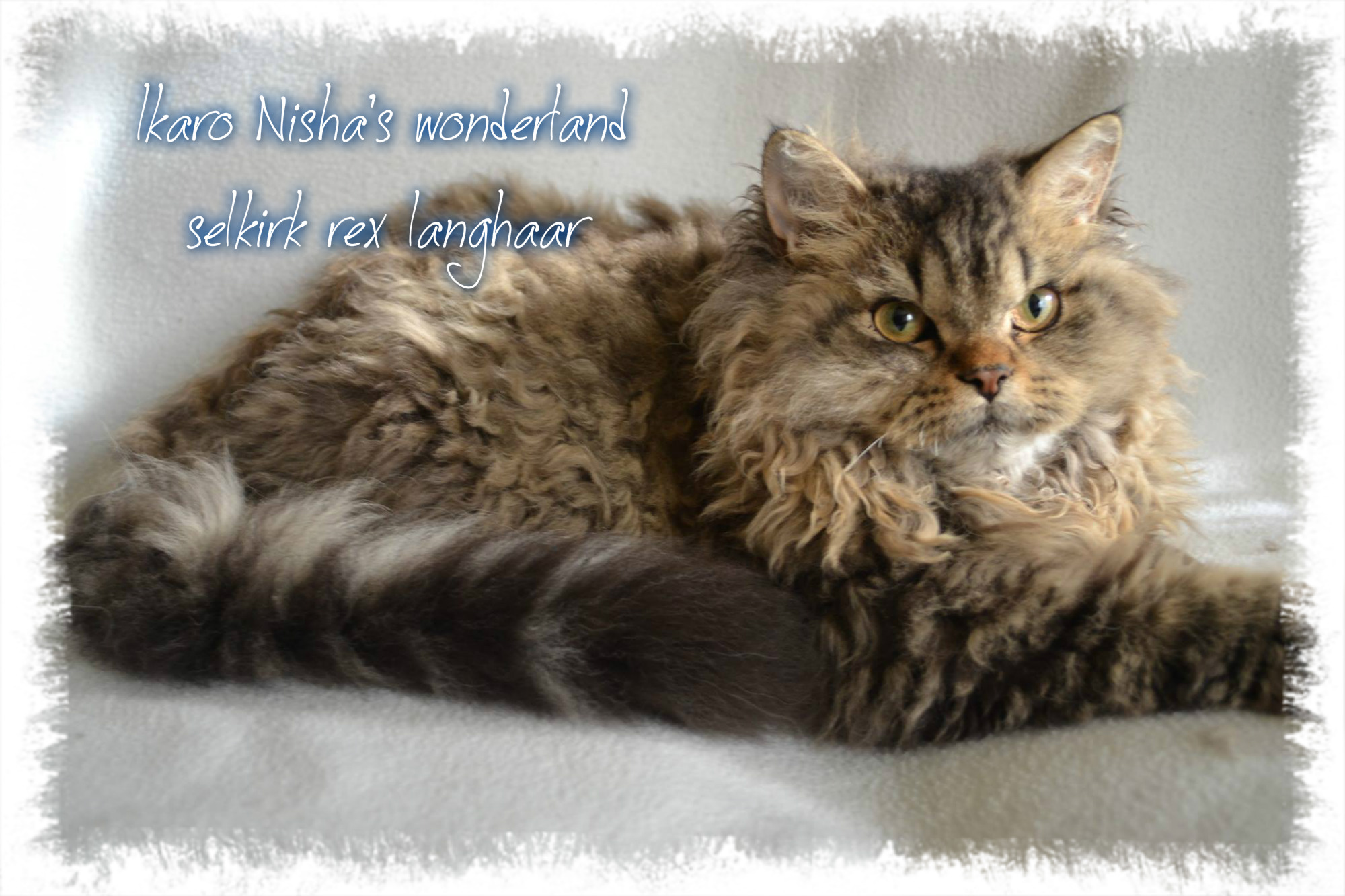 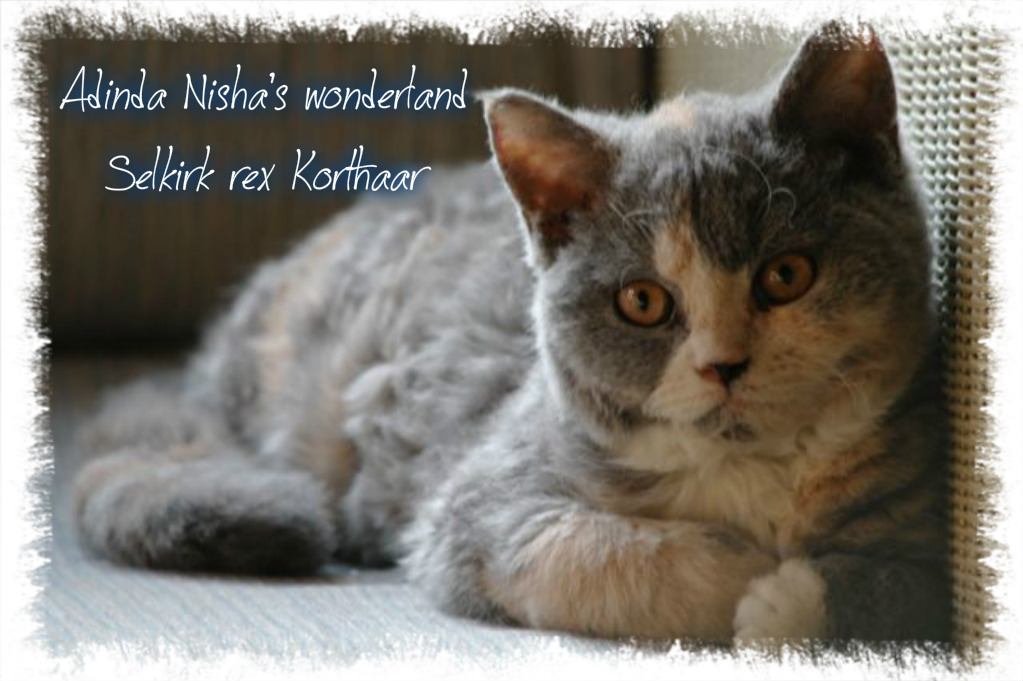 These females and males are the same as the heterozygous longhair but with the short coat.
If they lose their curl, partly up to the age of 2 years, this will be more noticeable than in a longhair.
Also in open males and females this curl will be considerably less but mainly on their backs.
The combination when breeding is the same as the heterozygous longhair.

The selkirk straight longhair has no curl. They look somewhat like a british longhair but there are a few key features that set them apart. They stand higher on their legs and their coat is not as stiff as a brit. Their collar is nice and long with just below and above, slightly shorter fur.

Just as there is long-haired variety, there is also a short-haired Selkirk straight. From appearance they look very much like a british shorthair. From the combination of straight and heterozygous will come kittens that are straight and curly. If you would use a homozygous stud, you would only get curly kittens.
Just like the longhair, this short-haired variant should not go back to british breeding!

From the combination of 2 heterozygotes, a homozygote can also be born.
These kittens become partly or completely hairless shortly after birth and this coat change can be repeated until the age of 2 years.
Often their coat is also less full than a heterozygote.
A homozygote does not meet the breed standard of a selkirk rex because their ears are larger and their head a bit more pointed. They are also not as full types of build. They also always pass on the curly gene, so all kittens will be curly which makes them desirable to breeders. 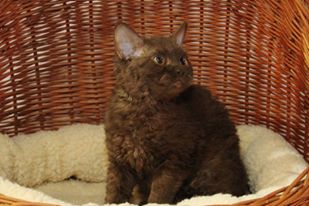 As with the longhair, a homozygote can also be short-haired. This of course depends on the coat of the parents.
Their coat is more curly than that of a heterozygote but they too can change coat until the age of 2 years.
Breeding is done with a heterozygote or a straight. It would not be good for the breed standard to mate 2 homozygotes.
Their kittens will always have a curl, being heterozygous or homozygous.

As mentioned above, homozygous kittens can become totally or partially bald. These are 2 kittens that were born to us and they were both pretty much bald around their 8 weeks. Currently, they have grown out super nicely, as I also expected!

The 6 varieties are written to make it understandable for everyone.
This is property of Nisha’s wonderland.